kids with covid and lasting complications

https://www.cnn.com/2020/10/12/healt...ess/index.html
Covid seems to be the convenient scapegoat for almost every syndrome known to man.

Regarding the first child, Postural Orthostatic Tachycardia Syndrome has been known for several years to be an adverse effect of the HPV vaccine.
applejuice and Deborah like this.
Tweety_Bird is offline
Quote
#514 of 556 Old 10-14-2020, 03:42 PM
Tweety_Bird

this 25yr old died after a 2nd reinfection

Meanwhile in Canada:
https://www.youtube.com/watch?v=dcfy16s94k0
Do you think this is real or staged?

Could perfectly well be real. but?

Do I think it is contrived? No.

At first I did - she is looking awfully pretty for a sick person. I now believe she just rallied when the cameras came and put on her makeup, or did a reenactment for the camera.

I believe it is likely real because of two things she said, neither of which are in line with party soundbites.

1. She said COVID was a blessing in disguise, as it let her know about an underlying health condition
2. She does not regret not being fearful, and would not change how she acted during the summer (which was within line with provincial guidelines, but she was not hiding in the house)

The media, I am sure, would like to put out cautionary and scary tales: perfectly healthy women gets covid, gets very sick (this part seems likely true) and regrets former socializing. This is the story they would have told if it were contrived.

That is not the story the woman told.
applejuice and Deborah like this.
There is a battle of two wolves inside us.  One is good and the other is evil.  The wolf that wins is the one you feed.


Some of the complexities of the numbers around Covid.
Quote:
If reducing fatalities is the goal, there is a much easier way to do that

Sadly, a lot of people die every day, and I’m sure you’ve seen memes on social media on how many more people die from other causes like Tuberculosis (1.4M in 2019) than COVID-19.
In the US, where the COVID death toll currently sits at 225K, it is estimated that medical malpractice kills 250K Americans a year.
But an even bigger number, according to the WHO, is that alcohol abuse kills 3 million people annually, and that number will surely go even higher this year given the massive spike in mental illness, domestic violence, child abuse, depression and suicide caused by the lockdowns.
If this is about saving lives, we could literally bring those alcohol related deaths to zero, turning it off like the flick of a switch by instituting a global ban on alcohol. We could do it tomorrow. Should we? The lives we save may include your own.
In fact if we banned alcohol then we could let Coronavirus run and still be ahead nearly 2M preventable deaths annually, provided COVID-19 kept going with the same intensity it was going in March and April, which it clearly isn’t (see below).
Of course, nobody would seriously entertain that, and they could probably articulate some decent logic around why we shouldn’t.
But they may dismiss it without considering how closely the lockdown approach toward reducing COVID fatalities is analogous to a worldwide ban on alcohol to eliminate alcohol related deaths would be. Especially since we also know that a large portion of coronavirus fatalities die with COVID-19 and numerous other comorbidities* than of it (however, see my footnote on that at the end of this post).
In that sense, alcohol related carnage is very similar. Few alcoholics drink themselves to death outright. Comparatively more kill themselves (and others) in car accidents, commit suicide, or generally wreck their livers, hearts, kidneys, brains or generally run themselves down so low nearly anything else will finish them off.
Second Wave Hysteria

Case counts are clearly rising again globally, that much is true and we have oodles of data to track it. With it, there come fears of the dreaded “Second Wave” of fatalities.
In the often cited Spanish Flu of 1918, the bulk of the fatalities came in the second wave. However, the Spanish Flu was a very different pandemic than the one we have today. That one attacked people right in the early years of the prime-of-life age curve: 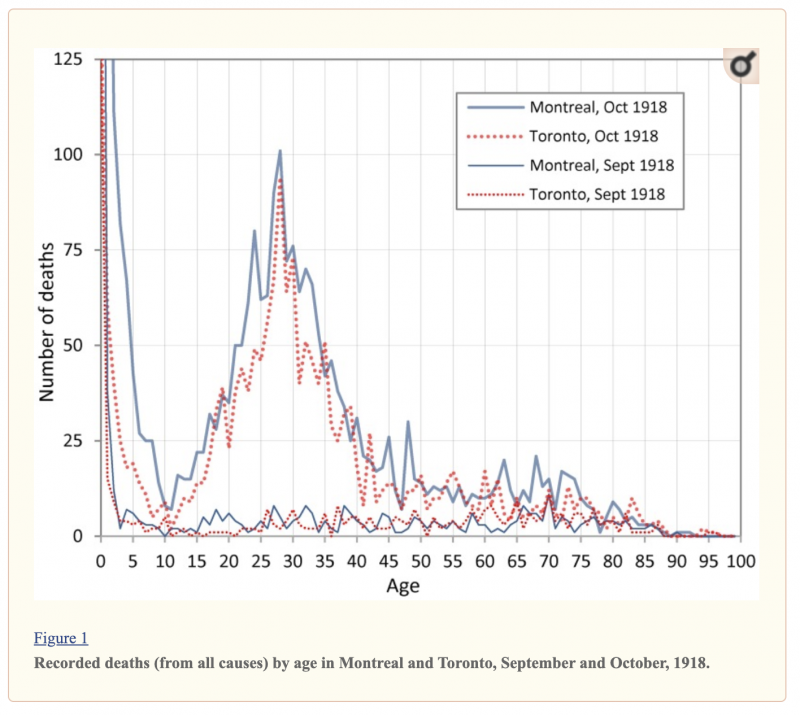 Join Date: Jul 2012
Posts: 8,807
Mentioned: 251 Post(s)
Tagged: 0 Thread(s)
Quoted: 2601 Post(s)
I tried looking up historical lengths of pandemics...and ha! Flus are one thing, other types of viruses and/or bacteria are another, and any hope of mine of being able to say "it looks like historically most pandemics of this sort lasted xyz amount of time" is a bust. Really, I think COVID is here to stay, although not at these levels.

I did find an interesting bit on the difference between the social end of pandemics and the medical end. The two are not the same thing.

"When will the Covid-19 pandemic end? And how?

According to historians, pandemics typically have two types of endings: the medical, which occurs when the incidence and death rates plummet, and the social, when the epidemic of fear about the disease wanes.

“When people ask, ‘When will this end?,’ they are asking about the social ending,” said Dr. Jeremy Greene, a historian of medicine at Johns Hopkins."
https://www.nytimes.com/2020/05/10/h...c-history.html

Today is Halloween. The nonsense and politics around COVID and Halloween have been astounding. I am COVID fatigued. On a personal note, I am celebrating halloween. We will place candy on a table outside and have decorated slightly. We are not usually busy at all on halloween, but if you are going out on Halloween, we will be there for you!
applejuice, Deborah, Nazsmum and 1 others like this.
There is a battle of two wolves inside us.  One is good and the other is evil.  The wolf that wins is the one you feed.

The thing is...people can put candy outside without going outside (some people are using chutes and stuff as candy delivery methods) and parents can quarantine the candy if they like before the kids eat it.. The whole calling it off thing is overkill.
applejuice and Deborah like this.
There is a battle of two wolves inside us.  One is good and the other is evil.  The wolf that wins is the one you feed.

I tried looking up historical lengths of pandemics...and ha!
Here in NJ (USA) we are 229 days of 14 days to stop the spread

"The Town of Aylmer has declared a state of emergency ahead of a second anti-masking rally planned for Saturday.

Aylmer police said in a tweet that the declaration was a direct response to the Freedom March planned for the afternoon of Nov. 7."

This is hysterical. I have never heard of Aylmer Ontario (and I live in Ontario) turns out it has about 7500 and is pretty rural. I cannot imagine the need for this.

We have had massive BLM protests in this province and in nearby Montreal and no state of emergencies were declared over the protests as far as I know...but you know, anti-maskers gathering in small numbers (in all probability) in rural ON - horror!
applejuice and Deborah like this.
There is a battle of two wolves inside us.  One is good and the other is evil.  The wolf that wins is the one you feed.

Join Date: Nov 2020
Posts: 6
Mentioned: 0 Post(s)
Tagged: 0 Thread(s)
Quoted: 1 Post(s)
more testing, more cases. but not necessarily more people who actually get sick. the problem has always been how to protect people who cannot cope with this disease - and isolation, by and large, has not protected the vulnerable. note the large numbers of sick and dying people in nursing homes.

Join Date: Nov 2020
Posts: 7
Mentioned: 0 Post(s)
Tagged: 0 Thread(s)
Quoted: 0 Post(s)
Don't forget fear is a huge factor in driving people to do what they're doing in the USA- fear based on hearsay, not facts

i'm thinking the Taiwan media is nothing like ours->> perpetuating stories of misery/falsehoods/etc
applejuice and Deborah like this.
gerigaj857 is offline
Quote
#540 of 556 Old 11-18-2020, 09:46 PM
applejuice

List from the drug companies' own package inserts that come with their product as required by law.
applejuice is offline
Quote
Mothering Forums > Health > Vaccinations > So who's scared to death of coronavirus?

Mothering is proudly sponsored by